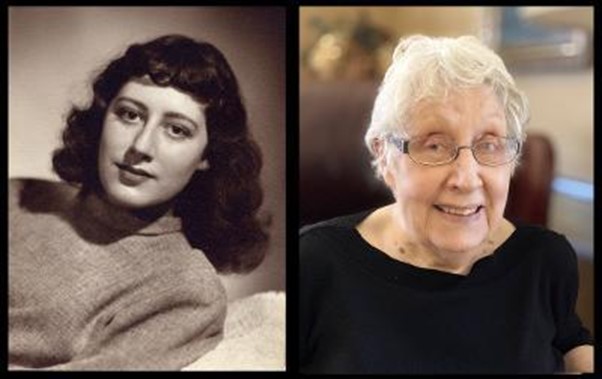 Erma Jean Schwab passed away peacefully at her home in Plano, Texas on September 21, 2021. Jean was born to Lodema Pearl King and Carl Winfield Roberts in Alabam, Arkansas on June 28, 1928. Dema and Carl’s marriage did not last. Life was surely difficult for a single mother and child at the beginning of the great depression, living with various aunts, Vesta, Mary, Cloe, Ruth and Veda – with whom Jean remained close throughout their lives – before long her mother met and married Walter “Skrip” Skripka in Cuero, Texas on July 29, 1939. Skrip helped raise her as his own, as the small family traveled throughout Texas, Louisiana, Mississippi, Alabama and Oklahoma as part of a Schlumberger oil exploration crew. Jean lived in more than a dozen different towns during that period and never experienced a full year in any one school. She nevertheless graduated near the top of her class from Robert Lee High School in Robert Lee, Texas and soon entered Texas State College for Women in Denton, Texas.

After obtaining an associate degree in business, she went to work for B.F. Goodrich in Galveston before joining the accounting department at Monsanto in Texas City. While there, she met and soon married a young mechanical engineer, Leonard Schwab, who like Skrip, was a graduate of Texas A&M. Together Jean and Leonard built a life together which quickly grew to include two daughters and a son. The resilience she developed in her youth surely served her well raising three children, Patsy, Marcia and Bobby, born within three years. It probably didn’t hurt that Lodema and Skrip settled in nearby La Marque and soon gave Jean a young sister, Susan.

In addition to cooking, reading and a love of bridge, Jean was active in the League of Women Voters, PTA and other civic organizations, but making a home for a family of five from the 50’s and into the 70’s while ensuring the emotional, intellectual and social development of her children was her love. That effort paid off when each of her children was awarded two Astros tickets to three games throughout their junior and senior high years for receiving straight-A’s, and while baseball may have never been her passion it allowed the family and friends to attend games in the newly built Astrodome.

Jean and Leonard’s early retirement included travel in Europe, skiing in California, traveling in the West, spoiling grandchildren and much rest. Sadly, Leonard died at the young age of 65 but Jean persevered, made new friends and traveled again to Europe, New England and California.  After a stroke, Jean relocated to Plano to be near her daughter, Marcia, where she maintained her own apartment for over 15 years, making many more new friends before moving in with her daughter and son-in-law who were with her when she passed away.

Jean had a profound love for her family and treasured her grandchildren and great grandson. Jean also had a great sense of humor, true joie de vie and in her later years loved her mimosas. To most who had the opportunity to meet her, Jean was about the sweetest person they had ever met. Her grace and generosity were both humbling and inspiring.

No Thoughts on Schwab, Erma Jean