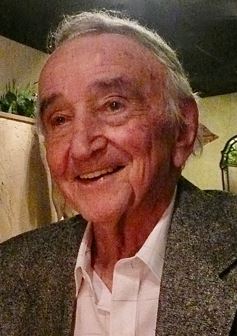 William Joseph Polk, 98, arrived peacefully to his heavenly home on August 29, 2022.  He is preceded in death by his two dear brothers Edward Polk and Theodore Polk, baby sister Patricia Ann Polkabla, and close cousins.  He is survived by his dear wife, Monique (Baert) Polk with whom he enjoyed a marriage spanning 62 years.  He is also survived by his children – Susan Polk and Mike Churchill, Linda Polk Haslanger and Mark Haslanger, and Danielle Polk Running and Aaron Running; and his grandchildren: Anna, Amanda, Elizabeth, Evan, and Annika.

Bill was born in Pennsylvania to John and Anna (Boretsky) Polkabla. His childhood stories were filled with fond memories of attending a one-room schoolhouse and swimming in the Monongahela River with his brothers and cousins.  He attended high school in Cleveland before joining the Army Air Corps during World War II.   There he received a Distinguished Service Award for his contribution while serving as a 1st Lieutenant and B-17 bomber navigator, often as the lead crew with the acclaimed 303rd Bomb Group.  He learned to navigate the skies by the stars and passed his appreciation of the stars on to the next family generations.

After the war, he attended General Motors Institute and earned a degree in Industrial Engineering and subsequently had a successful 43 year career at General Motors including multiple posts as a Plant Manager in Michigan.  He enjoyed the all-employee golf league because it included people from all levels and he also enjoyed advancing the careers of those around him.

Bill was a lifelong and devoted Catholic, meeting his wife, Monique, at a church dance when he spotted her in a red dress.  They raised 3 wonderful daughters in Michigan.  Bill lived life with joyful enthusiasm and positivity shared with his brothers and cousins, and passed this on to his cherished children and grandchildren.  From an early age, Bill played music on the Banjo, Ukulele, and Guitar, playing and singing into his 98th year.  Bill and Monique retired to Florida where they spent many years golfing and kept sharp by attending and occasionally giving educational presentations at the local university.  They subsequently moved to Texas to be close to family.

Bill’s kind spirit, positivity and Christian devotion has been a guiding light in our lives. He will be dearly missed in this world; his gracious spirit lives on in heaven with our Holy God.  Keep Smiling Dad (Grandpa)!

The family would like to express extreme gratitude and thanks to the staff and caregivers of Briarview Senior Living and Accord Hospice, particularly those “earth angels” who work in Memory Care, for their compassionate care during Bill’s later years.

Details of a memorial service will be announced in the near future.

Memorial gifts can be made to

Dear Susie, Anna, and Mike,
Rick and I keep you in our thoughts and prayers. Wrap yourselves in your dad’s love and wonderful memories❤️

A beautiful tribute. 98 years well lived! Sending hugs to you Susie, your mom, sisters and all your families.

Dear Monique,
Dear children, who will try to bring our greetings to her, do accept our condoleance.
For us both Uncle Bill was always present in our mind.
Initialy unknown to us as a bomb navigator flying right over our heads, in Tielt “with its 3 towers”.
Later as the man in the US who married Monique, and became a wonderful husband, and père-de-famille. And a great Manager.
We learned to appreciate him fully during a visit to Belgium.
Then we both were totally spoiled during our visit to all of you.

We both will keep him in our heart and pray God that we all have the profits of his example.

Dear Monique,
Dear Children, may we ask to try to bring our condolences to her, and to accept our condolences to all of you.
For both of us Uncle Bill was always present in our minds.
Initially unknown to us as bomber navigator who flew right over our heads, in Tielt with its “3 towers”.
Later as the man who married Monique, in the US, and became a wonderful husband and “père de famille”. And a great manager.
We learned to really and fully appreciate him during a visit to Belgium (and the Alsace)
Then we were both totally spoiled during our visit to all of you.
We will keep him in our heart and pray God that he will stay an example for all of us.