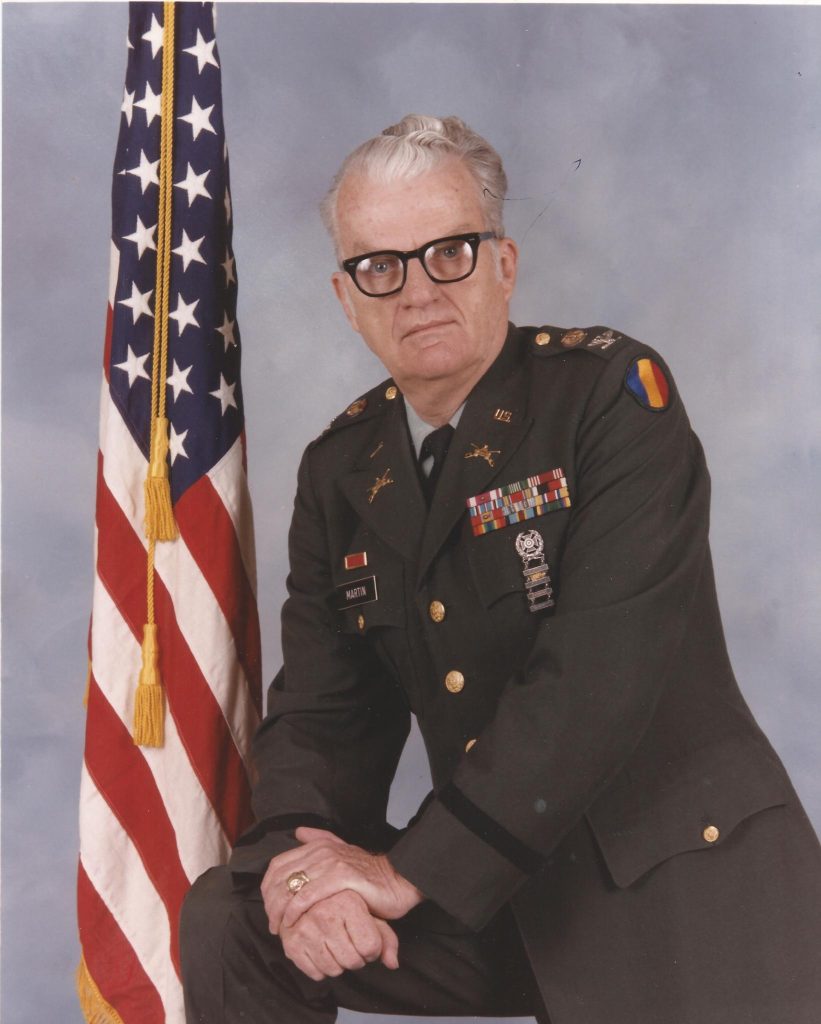 He graduated from Allen Military Academy in 1944; entered military service as a private in the U.S. Infantry, 1945; discharged in 1946 as a corporal.  Entered Texas A&M (Go AGGIES!) in 1947 and graduated in 1951 with a commission of 2nd lieutenant in the USAR.  Was called to active duty in September 1951 and

assigned to USA Europe.  Upon completion of three-year tour, he was  released from active duty and employed in the Dallas Independent  School District as a commandant of cadets at North Dallas High School. He also worked at Bryan Adams High School.

Recalled to duty in 1961 during the Berlin crisis with the 49th Armd. Div. Subsequent service was as troop commander, 2nd Sqdn. Of the  10th Cav., 7th Inf. Div. and a HQ Commandant; assistant S-3 at Ft. Stewart, GA and battalion executive officer at Hunter Army Airfield.  He was released from active duty in July 1968 and reverted to the USAR.   Assignments were as mobilization assignee to 3rd USA HQ and Forces Command at Ft. McPherson, GA; a C&GS instructor, Macon USAR School, Macon, GA; director of Plans and  Training, Ft. Riley, KS (ModDes); commander of COSCOM (RTU), Dallas, TX.

His family will remember his kind (if not sly) smile.  He also had a passion for sports: particularly golf, both playing and watching (on MUTE), and baseball (Go Rangers!).

He married Gloria Mae Dyer on Sept. 3rd, 1948 in Dallas, TX.  They had two daughters, Cyndy and Ceilia.  His career took their family all over the country (and world- Ceilia was born in Germany), and they finally settled in Dallas, TX.

After retirement they moved to HideAWay lake near Tyler, TX.   They enjoyed 59 years together before Gloria’s passing in 2007.

After living on his own for a while Col. Martin met Joy Kirschner.  The two were married in a ceremony in Hawaii.  They moved to Sherman, TX and shared many travels and other  wonderful times  before Col. Martin was no longer able to live at home without additional care.

It was then he moved to Clyde W. Cosper Veterans Home and happily spent his final days with other  veterans, notably his good friend Vinson. There he also enjoyed watching the birds flock to the bird feeder lovingly placed just outside of his window.

He was preceded in death by his wife of almost 59 years, Gloria; sister, Anne Montgomery; and brother, Theodore Martin.

He is survived by his wife of 7 years, Joy Vian Martin, of Sherman, TX; daughters, Cynthia Martin, of

Mesquite, TX and Ceilia Smith and her husband Robert,  of Dallas, TX; granddaughters: Samantha Watt and Emory Smith, of Dallas, TX; brother, Ernest  H. Martin and his wife, Beverly of Van Alstyne, TX; sister-in-law, Lila Martin, of Dallas, TX; numerous nieces and nephews; and many other family and friends.

The family would like to thank the exceptional care team at Clyde W. Cosper Veterans Home for their compassion and excellent care of Col. Martin.

Scarlett And Terry Lieck
8:37am

there is nothing that makes one feel more alone than losing a parent. So sorry for your loss but it looks like he had a long and great life full of love and service. God bless you during this sad time. Love, Scarlett, Terry, and AJ.

Graham was an inspiration to me. He loved his family, his country and his God. He had a joy for life and a kind heart. May we love and serve and live as he did! Blessings to all, especially my friend Joy.

It is with great sadness I ran across this notice. Col. Martin is a great inspiration and someone I have the greatest of respect for. The time I was associated with him during high school he excelled at young people becoming the best the could me. I will always be in his debt. With Sadness, Wade