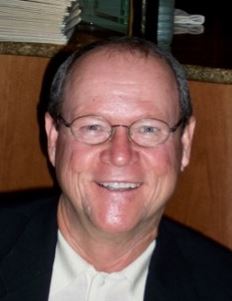 Born June 25, 1944, David spent the best part of his life in Texas.  He graduated from R. L. Turner High School in Carrollton, Texas and after attending college in Kansas, David enlisted in the U.S. Navy serving 4 years and earning the Distinguished Service Award.  David enjoyed a successful and fulfilling career at Executive Printing, a leading print broker business, which he established and operated until his retirement.

An avid football fan, David was an active and enthusiastic TCU fan, attending as many regular season and bowl games as possible, including a memorable trip to the Rose Bowl in Pasadena. He loved the outdoors and could often be found golfing, hunting, fishing, or riding his Harley.

David and Beverly traveled as often as possible and their travels took them to almost every country in the world including a 25th wedding anniversary flight to England on the Concorde.

David enjoyed hosting friends at home where his barbeque skills became legendary.  His grilling prowess earned him a designation as a regional and national barbeque competition judge.

Ron and I will forever miss David. He and Beverly have been our very best friends for many years now. We have had so much fun with them-going on trips, out to dinner, movies in the movie room….and for just David and Ron it was lots of motorcycle trips.
We will miss him,
Ron & Pat Justice

A great friend and classmate!

Steve & I will miss David. We have been close friends of Beverly and David for over 20 years
…sharing dinners, mototcycle rides, Baylor/TCU football games, and even going to our favorite event, The Kentucky Derby.
Prayers for Beverly and all his family.
Steve & Sandra Bell

David and Beverly were great next door neighbors, always ready for a good time! The neighborhood was not the same after they moved. We will always remember you, David.

Thank you Pat. We loved our times together with you. He will be missed❤️

He was a great friend. He will be missed by many❤️

David had a unique sense of humor. I enjoyed bantering with him. He will be missed. Beverly, you were a patient and caring partner for David.

So many great memories with David & Beverly. We have been friends for 37 years. David love Beech Creek & going fishing with Richy. It’s too hard to explain how we feel about his passing. Will be missed and will be loved forever. Rest In Peace.

He was a great brother and friend. I will miss razzing him.

We have many fond memories with you and Steve❤️

David,
I have only known you and Beverly for 5 years. As a neighbor, I enjoyed the times sitting on the Patio, talking Sports, drinking Wine, Cajun Cooking and your Bar-b-Que. I miss driving by the Circle at your home and not seeing you sitting there. It’s a bigger void than I imagined. Beverly, we are here for you and will be here to help as needed. David, I’m sure you have already started causing trouble with Saint Peter. I can see that gleem in your eye.
Ken Ardoin

Rick and I are so sorry for your loss. We were so moved by your love, care and devotion to David. A beautiful marriage is one blessed by the Lord. Praying God’s peace and comfort to surround you and your family.

Beverly, I am so sorry for the loss of your husband❤️ .

Beverly,I’m so sorry for your loss. David was a great guy and you two were so good together. Please know that my heart goes out to you at this difficult time. ❤️

Beverly, I never met David but saw several pictures of him over the years. You made such a great looking couple. I remember you borrowing my “70” sign for David’s birthday. WOW! That was 8 yrs ago! David must have been a great guy!
With Love and Prayers,
Peggy