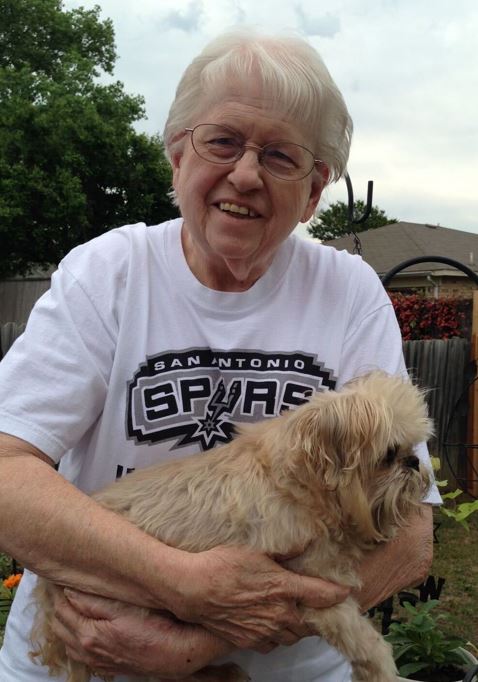 On May 25, 2022, Dorothy Patricia Taylor (nee Storment) went to be with Our Lord and Savior. Born in San Antonio on December 12, 1934, Dorothy came into this world ready to learn and teach. Dorothy recounted over the years about learning to take care of animals, sewing, cooking, and other helpful skills from her father and grandmother. Her father, Omar, worked several careers over the years. Omar looked to Dorothy to problem solve situations in order to help her expand her knowledge. Her parents moved to a home near San Pedro Avenue in SA when Dorothy entered high school in order for her to attend the newest high school in the city, Thomas Jefferson High School. Dorothy graduated in 1952 from TJHS. After graduation, she spent a semester at Texas Women’s University in Denton and then transferred to Southwestern University in Georgetown,  where she met her future husband, Cecil Carl Taylor, Jr. Dorothy and Carl married in 1957. Carl graduated from college and went on to become a minister in the Methodist church, and Dorothy left school to be a stay-at-home mother. Dorothy and Carl had four children together. After her mother died in 1974, Dorothy decided to return to school and receive her teaching degree to follow her lifelong passion of teaching. Dorothy taught for over 20 years. The majority of her career was spent teaching middle school students various subjects such as history, math, and English. Dorothy’s longest tenure was at Pleasanton Middle School, where she developed relationships with numerous students whose lives she later loved to follow through social media. While she taught at Burger King Academy and Kingsborough Middle School in Harlandale ISD, Dorothy was also a leader in the Association of Texas Professional Educators in order to help her fellow teachers. Dorothy developed a testing method early in her career which focused on individual students’ abilities, long before the public school system provided services to students who learned differently. She was also successful in helping students get needed resources for learning disabilities. Over the years, Dorothy wanted to learn more, so she returned to college to gain a Master’s degree in administration. Dorothy loved her children and doted on her grandchildren as often as she could. Dorothy was preceded in death by her parents, Ethel Storment (nee Hathaway) and Omar L Storment, and her sister Ruth Mahar, as well as her beloved dogs — Sally, Mandy, and Phoebe (Pdog). Dorothy is survived by her children, Cecil Taylor and his wife, Sara Taylor (nee Jones), and their children Anthony, Austin and his wife Julia Riley, and Rebecca; Patsy Arnold and her husband Doug, and their children Zach and his fiancée Edna Robledo, Joel, and Gabriella Howard and her husband Sam; Carlyn Taylor; and Jeanne Taylor and her wife Traci Tolliver and their children Cira and Trent. She is also survived by her brother John Storment and his wife Camille, as well as numerous nieces and nephews.

A funeral service will be held on Tuesday, May 31 at 2 p.m. at St. Andrew United Methodist Church, 5801 W. Plano Parkway, Plano, Texas.  The service will be livestreamed beginning at 2 p.m. at  https://www.standrewumc.org/memorial. Burial will be in her beloved hometown of San Antonio on Thursday, June 2 at 11 a.m. in the Sunset Memorial Park, 1701 Austin Highway.

If you wish to make a donation instead of sending flowers, the family would appreciate a contribution to:

Dorothy was a special person. I am so glad I was able to call her ‘friend’. She definitely touched many lives during her teaching career. This obituary is a beautiful tribute to her.
May God grant her family comfort & peace in the days ahead.

Ms. Taylor was one of my all-time favorite teachers. She made me think for myself and think through my problems. Ms. Taylor was tough, but she was also someone you could talk to. She was a shoulder that I leaned on when my Dad passed away. I’ve thoroughly enjoyed communicating with her these past years via social media and just wish that I could have seen her one more time.
I find comfort in knowing that she’s no longer in pain and she’s been reunited with her pups and loved ones.
My deepest sympathy to Cecil, Patsy, Carlyn, and Jeanne. Please know that your Mom was treasured by so many and she will be dearly missed.

My condolences and prayers. May God provide you with comfort and peace. Mrs. T will be missed. Loved having her as my teacher in Junior High. Later in life loved following her on social media. Prayers for all.

Such an amazing woman. I was honored to call her my friend these past two years. Her smile could light any room and always warmed my heart. Love you my friend Darlena