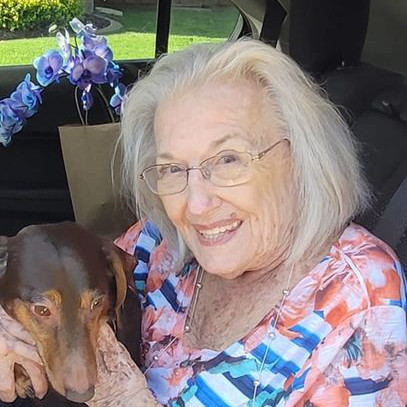 Forrestine Fuller Feezor White of Plano, Texas died on December 3, 2022 at the age of 84.  She was born on June 12, 1938 in Greensboro, North Carolina and was adopted by Jessica Rae Fuller Feezor and Dr. Forrest Chalmers Feezor.

Forrestine spent several years of her career in the furniture industry where she met her second husband, Jervis Russell White.  With her marriage to Jervis, she gained two stepsons, Thomas Russell White, and Michael Len White, and they had one daughter together, Jessica Jewell White Stephens.

She spent the remainder of her career in the bridal industry, with the majority of her time spent designing and writing invitations.  Forrestine was known for her exceptional etiquette and classic sense of style.  After retirement, she was a crossing guard for Allen ISD and was loved greatly by her honorary grandchildren.

Forrestine loved being surrounded by family and friends, and all who knew her were better for it.  She had a beautiful heart and cared greatly for everyone, but her quick wit kept everyone on their toes as well.   She and Jervis raised dachshunds and were rarely without one by their side.

Forrestine was preceded in death by her husband, Jervis Russell White, her parents and sister, Anne Joy Feezor Ballew and her brother in law, Royce.

Deepest condolences to my friends family. She was a delight to be around and I will miss her greatly

My dear friends, words cannot express the volume of gratitude I have in my heart for the opportunity to be blessed by Mrs White. She was my friend, my 2nd Mom and 2nd grandmother to my children. Thank you for all you were in life. You are a wonderful example to kindness, love, compassion and that “never give up” attitude. Until we meet again, your sister in Christ – Keri

Sending my deepest sympathies. Mrs. White was a true delight and a positive face every morning and afternoon loving on our Chandler Cheetahs – Amy S.

Mrs. White was Miss Sugar in our household. She created such a sweet special bond with my son when he was 2 …unbreakable. ❤️ She would send goodie bags with us for my son and daughter when we took road trips, and always snuck gifts in our mailbox at Christmas and birthdays. She was an angel, and such a sweet soul. You will be missed Miss Sugar.💔 Rest in peace with Mr. Sugar.

Mrs. White was such a blessing to countless Chandler students and families. Her kind, gentle soul and beaming smile will be greatly missed!