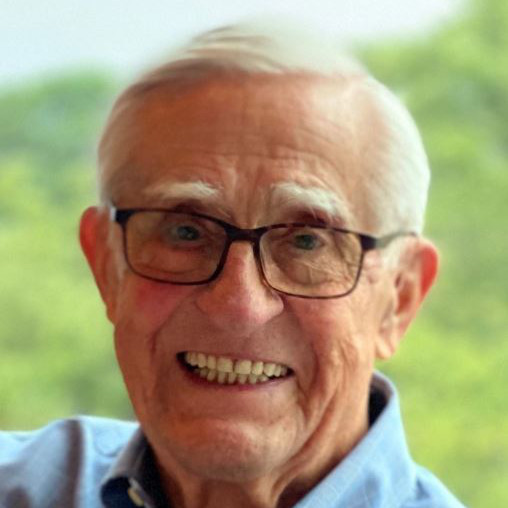 Gene Everett Michel, beloved husband, father, and friend, passed away at home in Frisco, Texas, on Sunday, December 4, 2022, after a bout with lung cancer. He had enthusiastically celebrated his 91st birthday in August. He will be deeply missed by all who knew him. His kind heart and genuine nature will never be forgotten.

Gene was born to George and Helen (Grant) Michel in Cedar Rapids, Iowa, on August 30, 1931. He frequently told stories of growing up on a farm, including about Depression-era austerity and riding his pony to carry water to workers in
the fields. He attended a one-room country school for nine years and then high school in Marion, Iowa, where he was active in music, track, and theater.

Dr. Michel graduated from the University of Iowa with bachelor’s and medical degrees followed by a medical internship at St. Luke&#39;s Hospital in Cedar Rapids, Iowa. He then served two years as a captain and paratrooper in the US Army,
stationed mostly at Fort Campbell, Kentucky. He spent the next forty years practicing family medicine, first in Sac City, Iowa, and then in Cherokee, Iowa. Dr. Michel was certified in Family Medicine and was President of the Iowa Academy of Family Physicians in 1980. Dr. Michel retired in 1999.

Gene married Marilyn J. Tyler on September 5, 1953. Born to them were four daughters: Denise, Amy, Brenda, and Karen. He married Donna R. Hinrichs on September 25, 1969. They settled in Cherokee, Iowa, in 1970 and welcomed their son, Doug, a few years later.

He enjoyed numerous hobbies in his 91 active years, including boating, sailing, flying, singing, acting, baking, bird watching, bridge, golfing, traveling, farming, handyman projects, and watching Iowa Hawkeye football and basketball games. He was very involved in the Presbyterian church, serving in several roles, including as youth leader, choir member, ordained deacon and elder, and member of the board of trustees. He gave back to his communities in many ways, including through organizations such as Meals on Wheels, Flying Club, Masonic Lodge, American Red Cross, Cherokee Community Theatre, and Cherokee Symphony Orchestra. He served as Cherokee County Medical Examiner &amp; Coroner. He also spent countless hours timing swim and track meets, assisting the elderly with various needs, and helping anyone in medical distress.

Gene was preceded in death by his parents, son-in-law, Brian Alaimo, and sister, Beth McPherson.

In lieu of flowers, memorials for Gene may be given to Trinity Presbyterian Church, 5871 Virginia Pkwy, McKinney, TX 75071, or Faith Presbyterian Hospice, 12477 Merit Drive, Dallas, TX 75251.

Our sincere condolences to all of the Michel family.

Our deepest sympathies to Donna, Doug, and the rest of the Michel family during this time!

Our sympathies to Donna, Doug and your entire families. We are saddened to hear of Dr. Michel’s passing. We hold many good thoughts of him and your family from your time in Cherokee. Blessings to you.
Dan and Barb Kratz and family.

Our sympathy Donna, Doug and Michel families. Our family is forever grateful
For Dr Michel’s care.

Our sincere condolences to you and your family, Donna. May he rest in peace.

Our sincere sympathy to you Donna, and the rest of the family. Dr. Michel will forever hold a very special place in my heart. He carried Jake through the most difficult disease into a cure and taming my worst fears. He was the best and you were his rock. Thinking of you.

Gene, a truley remarkable person. He was a wonderful friend to all who knew him at Frisco Lakes. He will be missed, but not forgotten.

Donna, Doug and Family- thinking of you all. So many wonderful memories of Dr. Michel and your family growing up in Cherokee. Our sincere condolences. Jim and Susie Haselhoff

Donna, Doug and family thinking of all of you! We have many fond memories of Dr. Michel! He delivered all three of our kids! Great guy and great family friend!

Prayers for all of the Michel family! Enjoyed working with him when Sports Rehab contracted at the hospital for PT, during his time in Cherokee!
Karmen & Jamie Hodgdon

I am so sad to hear of Dr. Michel’s passing. What a great man and friend he was to the Dillman family. He touched so many lives with his kindness and care and he will be missed by many. Our sincere condolences to Donna, Doug, and the entire Michelle family.

Thoughts and Prayers to Donna, Doug and all the Michel Family. Such a great man who will be missed by many. Our sincere condolences!

Damon and Amy Miller and Family

Gene was a fine person and someone i admired. He epitomized strong midwestern values and the good things in life. I will remember him and thank him for his friendship and guidance.

Gene was a fine person and someone i admired. He epitomized strong midwestern values and the good things in life. I will remember him and thank him for his friendship and guidance.

Gene was one of the first people to welcome us as newcomers to Frisco Lakes. It was a privilege to know him. He always conducted himself with kindness and dignity. We will greatly miss him!