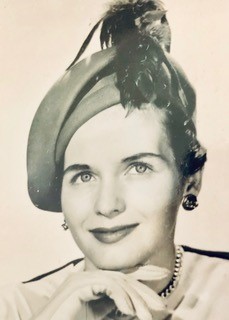 On Tuesday, February 23, 2021, Joan Howell, beloved wife, mother, grandmother and great-grandmother, passed away at the age of 94. Joan was born on September 12, 1926 in Chicago, IL to James and Elizabeth Docherty, the youngest of five children. She was one of the top fashion models in Chicago throughout the 1940s and 1950s, and into the early 1960s.

Joan was a beautiful person, inside and out. Her modeling career began at age 14, when a manager in a department store spotted her and offered her a job modeling the new line of junior-size clothing. That day, during the Depression, she wore cardboard in her shoes and was shocked to be paid $10 to model each Saturday. From that start, she quickly rose to the top echelon of fashion, modeling for Marshall Field & Company, appearing in Vogue Magazine, starring in the first television commercial in Chicago and being named Chicago Model of the Year. She also appeared in national television commercials and as an extra in the 1947 film This Time for Keeps, starring Esther Williams and Jimmy Durante. Fashion photographers often requested her, not only for her beauty but also for her professionalism and cheerful personality.

Joan’s inner beauty shone through her entire life. Generous and welcoming, she radiated love and happiness. Her family and friends recall her bright spirit and laughter, her delight in others and her warm heart for anyone in need. She had a lively mind right up to her last day and was an avid reader, news hound and unbeatable Scrabble player. She was a lifelong Democrat and served many years as an election judge and door-to-door campaigner. Her personal thank you letters from presidential candidate Adlai Stevenson and President Harry S. Truman are a tribute to her volunteer work on their behalf. She had great curiosity about others and was a worldwide traveler. Joan had a wonderful life despite its challenges and losses. She always looked forward to and celebrated every occasion.

One of Joan’s proudest achievements was becoming a teacher. She received a bachelor’s and master’s degree in education from Northeastern Illinois University in the 1960s. She taught elementary students in Chicago and Garland, TX with a specialty in dyslexia.

On May 8, 1948, she married Jack Howard Bramlette. Married 26 years, they raised three daughters, Dana, Julia and Joan and one son, Lawrence. Following the death of her husband in 1974, she married Pat Howell in 1978 in Dallas, TX.

Joan was preceded in death by her father, James, her mother, Elizabeth, spouses Jack Bramlette and Pat Howell; daughter, Dana, and her beloved siblings; Betty, Jim, Patricia and Richard. She is survived by her three children; Julia Rossi of Salt Lake City, Joan Jackson of Dallas and Lawrence Bramlette of Houston; her grandchildren Martha Suquet, Alice Bradley and Raffaele Rossi; five great grandchildren and numerous nieces and nephews.

We would like to thank the exceptional staff at CC Young in Dallas for their loving care and dedication. We also wish to acknowledge the consistent support and dedication of her longtime cherished friend, Hallie Garner.

A memorial service will be held on Zoom on April 11, 2021 at 3 p.m Central Standard Time. If you are interested in attending the Zoom memorial service, please send your email address to: jrossi1028@icloud.com.  A private graveside service will be held in Longview, TX later this spring. Donations in her honor may be sent to www.aid4edu.org, a Texas nonprofit that supports teachers or to the charity of your choice. We will miss her always.

One Thought on Howell, Joan

My heart goes out to all of the family and friends of Joan. I am happy that I knew her during her time in Dallas. She was a remarkable woman who leaves behind a legacy of wisdom and love.