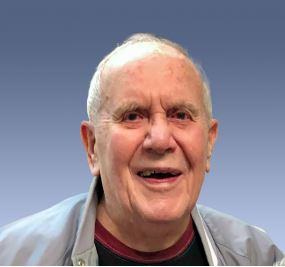 His fondest memories include boxing at the Catholic Youth Organization. Jack won every bout, except one draw. You could make a dollar if you lost and two if you won, “big money in post depression days.” Ever the fighter, he decided to enlist in the Navy on December 8th, 1941, the day following Pearl Harbor. Destined to be a signal man on
Navy destroyers. Stationed off the coast of Japan, where he and his crew prepared for an imminent Axis invasion while mounting the U.S. counterattack on Hiroshima. When the war was over, he left the Navy and went on to join the Merchant Marines. Sailing the Great Lakes for two more years before marrying the love of his life, Suzanne
Yvonne Morrissey, fondly known as “Sue.” Eager to start a family, they moved to Pottstown, PA, where they were blessed with four beautiful children: Linda, Barbara, Laura and Ray.

Bethlehem Steel was hiring in Pottstown and Jack became a skilled welder. Constructing local bridges and fabricating essential components for historic projects like NYC’s Madison Square Garden and the World Trade Center. He also made ends meet by painting houses after work. When the Bethlehem plant closed in 1976, he went to work with Neapco Auto Products Corporation for another 10 years. In retirement, Jack would relax with archery, swimming and diving. He enjoyed swing dancing with Sue while listening to big band, or taking long bicycle rides to
visit his many friends. He never met a stranger, fostering friendships wherever he went.

After caring for his darling Sue during her three year battle with cancer, he became a widower in 1995.

Memorial contributions are welcome at the Wounded Warrior Project or the Tim Tebow Foundation. https://www.woundedwarriorproject.org/donate, https://www.timtebowfoundation.org

No Thoughts on Jack Raymond Bond