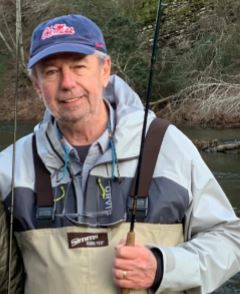 Jim was born in Paterson, NJ on October 5, 1943, and he grew up in Hawthorne, NJ. He married his wife Chris in 1966 and they raised their two children, Kristin and Brian in Trenton, NJ, Rochester, NY, Marietta, GA, and Plano, TX. He spent six years in the U.S. Army Reserve, and he earned his bachelor’s degree from Rider University. He had a long and successful career as an executive in sales, human resources, and consulting before retiring in 2021.

Jim was an avid fly fisherman, and he and Chris enjoyed many fishing adventures over 30 years to places like Argentina, Alaska, and the many rivers of their beloved Montana. He was a dog lover, with a special love for Labrador retrievers, and more recently their flat-coated retriever River. He also had a passion for cooking, regularly preparing gourmet meals for family and friends and happy to share his opinions in discussions of politics. He especially loved watching his three grandchildren, Madeline, Aidan, and Georgia, succeed in school and athletics.

A memorial service will be announced shortly, and memorial contributions may be made in Jim’s memory to Trout Unlimited, Texas Sporting Breed Rescue, or the charity of your choice.

No Thoughts on James Farrell