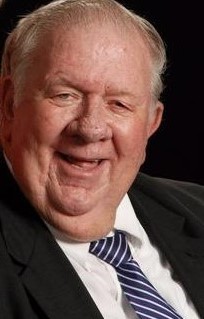 Jim was born July 16, 1940, on the family farm in Jackson County, Arkansas, the youngest of three boys who were all car and fishing enthusiasts. Known as Grinner, Bear, and Burr, he graduated from Tuckerman High School in 1958 where he served as Senior Class President and was named winner of the Beard Citizenship Award. He was a member of the Student Council, the school basketball team, Future Farmers of America, and the 4-H Club. He graduated with a Bachelor of Science degree in Business Agriculture from Arkansas State University in 1962 where he was a member and officer of Tau Kappa Epsilon. Following graduation, he moved to Houston where he served honorably in the Air National Guard Reserves and began a 35-year career with the United States Treasury Department’s Bureau of Alcohol, Tobacco, and Firearms (ATF).

While in Houston, he met the love of his life Mary Eleanor Kehl, and they were married on September 4, 1965. He and Eleanor moved to San Antonio in 1965 and later settled in Richardson in 1973 with their two young children. Jim was deeply involved in his community. He was an active and proud member of First United Methodist Church Richardson (FUMCR) for 49 years. He and Eleanor were members of the Fellowship Sunday School Class. He took particular joy in welcoming people to FUMCR as an usher on Sunday mornings and offering comfort and assistance as an usher at funerals and memorial services. He served as President of the Richardson East Rotary Club and was recognized as a Paul Harris Fellow. He was a Past President and founding member of the Duck Creek Homeowners Association. He served on the City of Richardson Planning Commission and was awarded a PTA Lifetime membership by the Richardson ISD.

He and his yellow Volvo station wagon with its squeaky brakes were known far and wide as he assisted his teenage children with their Dallas Times Herald paper routes throughout much of the 1980’s. Everyone who knew Jim knew he was especially passionate about sports. He coached the Rainbow and Red Birds to numerous RSI and YWCA City Championships in soccer and softball. He enjoyed watching and supporting the Apollo Panthers, Berkner Rams, Arkansas Razorbacks, Texas A&M Aggies, Dallas Cowboys, Texas Rangers, and Dallas Mavericks. He was a fan of the Southwest Conference and the Cotton Bowl. He is preceded in death by his parents, Robert F. Henderson and Dorothy M. McNair Henderson, brothers Robert F. “Bobby” Henderson, Jr. and Charles G. Henderson, mother-in-law Frances Kehl, and her brother William J. “Bill” and his wife Beth Jacks. He is survived by many loving family members, including his wife of 56 years, Mary Eleanor Kehl Henderson, son Michael Charles Henderson, daughter Susan Marie Henderson, and grandson Austin Reed Henderson-Jung.

In lieu of flowers, donations may be made to First United Methodist Church Richardson, 503 N. Central Expressway, Richardson, Texas 75080 or to

The burton family has great memories of the duck creek days and his smiling face and wonderful family. So interesting to read all his accomplishments and know he touched so many lives. Prayers and peace to all the family

To the Henderson family our hearts go out to you. May God bless you and keep you with his love . We will miss Jim.
The Cullen’s. (Neighbors 47 years)

Jim was my best friend since 1962 when we landed in Houston as fresh college graduates having been born on small family farms and growing up in small towns. I am sure his family has an abundance of fond memories to remember him by. My prayers are for you to have God’s grace to give you strength to bear the great loss you are suffering now. May God bless you and keep you in the palm of His hand.

I met Jim back in 1968 when I was just a fresh recruit in our agency and he was a seasoned inspector in San Antonio. I immediately came to respect and like him, but I never knew our friendship would last for more than fifty years. There are many warm memories I could talk about but the one that stands out is when he mowed our lawn while we were in the hospital awaiting the birth of our son. We didn’t ask him, he just did it out of friendship knowing that we needed the help.

That’s the kind of man he was. I’ll miss him.

My condolences to the family. I work with Jim at ATF. I am so sorry to here of Jim’s passing. Your co workers always seem like your family because we were all a part of each others lives for years. Jim because of your commitment to family, work and your community, Job Well done.