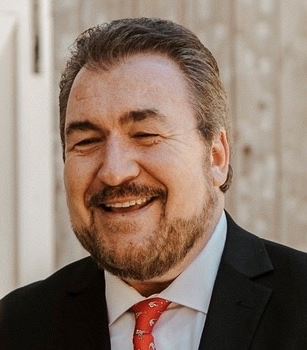 Born in Flushing, N.Y. to Denise and Jean Mayeur, on July 17, 1963, Jean-Paul (J.P.) spent his early childhood in the U.S. and France, attending primary school in France before moving to Richardson, Texas in 1973. He graduated from Berkner High School and went on to earn his A.A. from Richland College.

Jean-Paul’s early work history underwent many incarnations. He started out in the hospitality sector and was written up in “D” magazine as making the best martinis in Dallas. While an “apprenticing chef” at Cafe Pacific, he worked under talented chefs from the Culinary Institute of America and honed his skills for his life-long love of cooking.

Jean-Paul’s hobbies included traveling with his family and cooking. In Europe, his favorite place to travel, not surprisingly, was France where he held dual citizenship. At home he was in his element in the kitchen. When wielding a spoon or spatula, he was a happy man. He loved concocting delicious meals for friends and family.

J.P.’s many friends remember him as gentle, loving, and amusing. He exhibited a playful, insightful sense of humor to those close to him. He was a loving, hands-on father to his much loved children, Taylor and Kyra.

J.P. is survived by his ex-wife, Devona and their son and daughter. His loving children, Taylor and Kyra, are joined by Taylor’s wife, Jessica and their daughter, Teagan, as well as Kyra’s husband, Caleb. Additional survivors include partner, Patty Morales, and her extended family, step-mother, Betty Mayeur and her family, and many precious cousins and nieces, both here and in France. J.P.’s three fur babies also survive him.

Jean-Paul was preceded in death by his mother and father, Jean and Denise Mayeur, his brother, Francois, and his uncle, Rene.

The family has held private services, but a celebration of the life of Jean-Paul Mayeur will be scheduled at a later date.

Any donations should go to the Humane Society, SPCA, or any favorite animal group.

Jon Paul was a delightful individual who lit up the room when he entered. What a beautiful difference his life made. What a large hole his passing leaves. May your memories of him give you strength and comfort.

JP leaves behind many who will miss him and his wit. His life was much too brief. I know there will be some comfort in the good memories.

You were a ray of light for us all. 🤍

JP was the best business partner and friend a woman could ever dream of having. I can not think of anyone better to go into business with than JP as Therapeutic Impressions (he came up with the name) in 2007. His selflessness, his compassion, his empathy, his infectious smile, his unconditional love for his family and friends and clients who turned into friends were immeasurable. I pray that these tears of sadness will turn into tears of joy when we are all together again. Huge Hugs to all who were blessed in this life to have JP as a integral part of their journey upon this earth. We Love you JP and we ALWAYS will!!!

JP was a compassionate, loving man and a very gifted massage therapist. My husband and I were long time clients and friends. He will be greatly missed. Our thoughts and prayers go out to his entire family. JP’s love will live on forever in our hearts.
Brenda & Jim Johnson

I am speechless and so very sad at the loss of JP. He was such a wonderful, caring man. Our friendship started over 40 years ago when we were lab partners in Anatomy and Physiology in high school at Berkner. We shared a love of scary movies, music, dogs and the Dallas Stars. He liked to call me a wimp and other names when we discussed food. I wasn’t as adventurous a cook as he was. He was one of my very best friends. Biggest hugs to his family. He loved all of you so very much.

JP
I still can’t believe how fast you left.
We had exchanged at the beginning of January about my father who has just died. Despite the distance we were so close.
You leave me with this great emptiness my cousin.
You will remain in my heart.
Alex

We were kids and I still see you on your dad’s boat with your little poodle sitting next to your Fafa. You grew up to be your father’s clone. Shock and deep sadness. The world is a harsher place without you. My deepest condolences to all you touched. I know how you loved your family and how proud you are, You will be missed. I am so so sorry.

People will never forget how you made them feel… so true. JP made everyone who knew him feel special. He was an incredible soul with so much love to give this world. His absence will leave a hole in everyones heart. Thank you my love for letting me enjoy part of this journey called life together with you. I am such a better person because you loved me. Thank you ❤️

LOVE TO YOU. JP WAS ONE OF THE MOST CARING, SINCERE AND “REAL” PEOPLE I’VE KNOWN. HIS HUMOR AND KINDNESS WILL BE MISSED. IF YOU YOU THINK IT IS APPROPRIATE KEEP US INFORMED RE: THE CELEBRATION OF HIS LIFE.

So many good memories and laughter. You are a bright light. God Bless.

The Mayeur family was one of our 1st friends in TX. Such fond memories of the friendship, laughter and great times. My heart goes out to his children and family. 🙏

I was so very sorry to hear this news. I met JP as a client and had only been going to him a few months but we had some great conversations about growing up in the 70’s, science fiction, and pondering about life stuff. Great therapist and a great guy. – he will be missed by many! My heartfelt condolences to his family and friends.

JP is my friend and massage therapist since we met in 2012. I still can’t believe JP has passed-away as he seemed so vibrant and happy just the week before; the loss of JP is hard to put into just words. After getting literally hundreds of weekly massages from JP, we became very good friends. We had so many similarities and differences in our lives that we both looked forward to hearing about each other’s life-updates every week. We had similar tastes in movies that we texted each other regularly with movie recommendations. I liked hearing JP’s stories about his many other amazingly-successful previous careers including professional culinary, bartending, and even property appraisals before starting his own business as the best massage therapist I’ve ever experienced. JP’s massage skills were only exceeded by his amazing culinarily skills – each year making his special holiday recipe of pate. JP is a true blessing and inspiration to have had him in my life.