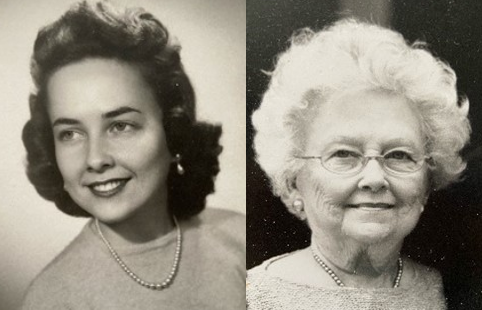 Joanne was born October 7, 1929 in Houston, Texas. She was a 6th generation Houstonian. She graduated from Houston Lamar High School in 1948 and headed to Fort Worth, Texas where she went to Texas Christian University, met her husband Robert, and graduated with a degree in home economics (you don’t hear of that degree anymore) in 1952. They married August 16, 1952 in Houston at the Bethany Christian Church. They lived in Boston for a short time before moving to Dallas to start their family with the birth of Hal in 1956 and Matt in 1958 and later that year moved to Roswell, New Mexico where Paula was born in 1964. Their time in New Mexico was spent raising their family and making many lifelong friendships. In 1968 they returned to Dallas, Texas.

Being a supportive wife and mother, Joanne dedicated her life to her family giving her time and effort toward church, Scouting (2 Eagles & 1 Bluebird), TCU football and basketball, Dallas Cowboys, Northway Christian Church, Meals on Wheels, TCU Women’s Club, March of Dimes walks, and summers and daycare with her grandchildren and great grandchildren.  She treasured her time with Robert and her family, spending many summers in the Colorado mountains at Elk Creek Ranch.  Later in life she took care of her husband when he suffered from Alzheimer’s Disease.  She had a true servant’s heart.

Our thanks go to the employees at Twin Rivers Assisted Living in Richardson, Texas and Amity Hospice for the love and compassion they showed to our beautiful mom.