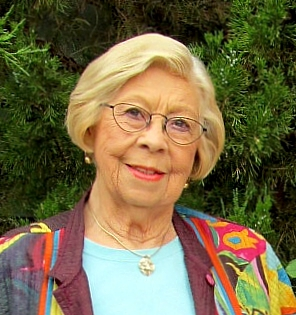 Her family celebrates the long and full life of Doris Davison Ley, who was born on June 15, 1920 and passed from this life on April 10, 2021, just two months short of her 101st birthday.

Doris was preceded in death by her parents, her husband Ross H. Ley, her brother and sister-in-law Joe and Leatha Davison, her sister-in-law Mary Anne Ley Faulkner, and infant daughter Susan. She leaves behind her children Cynthia Ley Anson and Laurence Ross Ley and devoted daughter-in-law Georgia Ley; her grandchildren Carolyn Ley Thomas (Jake), Laura Ley Staub (Blake), Matthew Anson (Katherine), and Colin Anson; and great-grandchildren Grant, Nathan, and Andrew Staub; Abigail, Luke and Miles Thomas, and Alexandria Anson. She also is survived by her nieces Teresa Daniels and Diane Davison, with whom she was especially close.

Doris grew up up in the Kansas countryside outside Bonner Springs, with her brother Joe as her best childhood friend. In her formative years she studied piano at the Kansas City Conservatory of Music and art at the Kansas City Art Institute. After graduation from high school she attended University of Kansas and earned a degree in fine arts. She continued to paint and draw throughout her life and today her family members continue to enjoy her works. Her creativity and elegant touch were a hallmark of her decor, fashion, gardens, and gracious hospitality.

On the campus of KU Doris met her future husband Ross, a Texan. They married in 1943, a partnership that lasted 65 years until Ross’s death in 2008. Ross’s work as a petroleum geologist took them to Roswell, New Mexico, Midland, Texas and eventually Dallas. When their children were raised, Doris and Ross travelled extensively, together and with friends. They were especially partial to Mexico, Spain, Portugal, France and England where they had many adventures. Since the 1950s they also spent time in Aspen, Colorado in summer months, leading to a long-standing family connection to that area.

Doris had a lengthy career in Dallas as an interior designer under the name of Doris Ley Interiors. Her stated desire was to create settings in which people could flourish and be happy. Many of her clients in Dallas and other locations became her personal friends. She also enjoyed the friendship of designer colleagues, showroom representatives in the Dallas design district, and local furniture craftsmen, painters, upholsterers and fabricators.

Since 1976, Doris resided at The Athena Condominiums in Dallas, where she twice served as president of the board of directors, and where she was instrumental in the redecorating and refurbishment of the common areas and the landscaping at the building entrance.

Doris survived all the members of her family generation and almost all of her friends, yet even in her last years she greeted each new day with interest, optimism, and appreciation. We are grateful for her presence in our lives and the sustaining memories she left us. We wish to express deep thanks to her physician Dr. Shounak Das, her caregivers of the last few months, Shambi Irving and Shaniqua Woods, the staff of Amity Hospice, the staff of The Athena especially Matthew Keller, Frennie Brooks, Arthur Jones, and Fernando Paredes, and her housekeeper Margarita Ortega, all of whom were essential to her continuing to live in her own home, where she passed away surrounded by family.

A private graveside service will held Saturday, April 17
with The Rev. Mary Lessmann of St. Michael and All Angels church officiating.

My thoughts are with the entire Ley Family… I had the pleasure of knowing Doris for 41 yrs as we were neighbors at The Athena.. Doris was a remarkable person and I feel very privileged to have called her my friend…
Fondly ,
Lynne Bogart

Lynne, thank you for your lovely comments.

She was so welcoming to me from the day we met. Will miss her terribly.