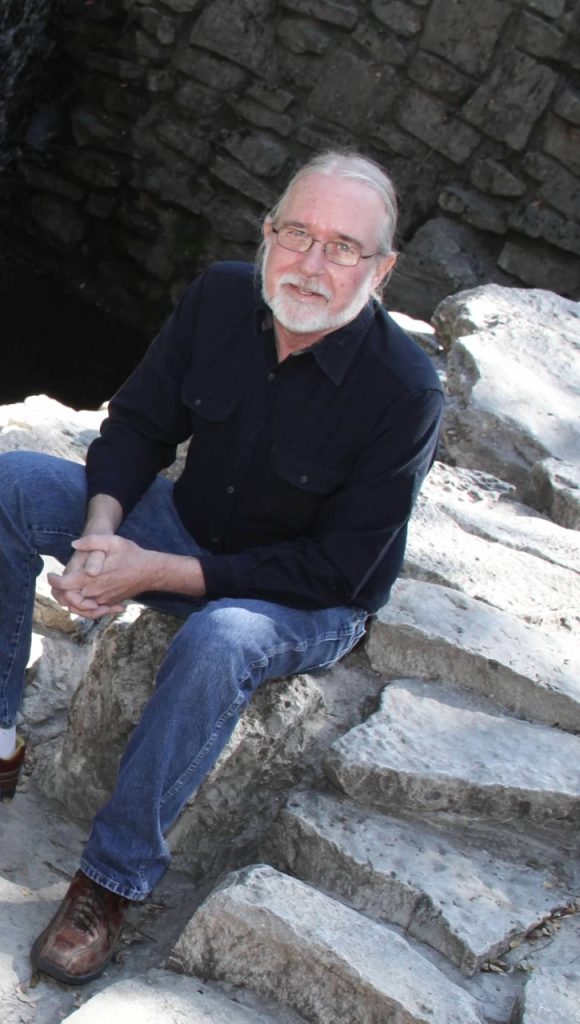 Life is a journey of happiness and fear, pain and joy, determination and the exultation of overcoming the many difficulties we face in the path we tread – our “small victories”. Each of these feelings is life itself. All of us have been a part of Mark’s journey through the joy and pain that are the essence of our existence, and finally to the arms of God. As you read his family’s memories, take a moment to think of the time you shared with him on his path, and do not mourn his passing, but smile and celebrate his contribution to your life – be glad you were an important part of his existence, even if only for a brief time. Here are the memories of those who loved and shared with him; I use their words to reveal their love of the man.

Mark was born in 1956 in Dallas, Texas; the son of Dorothy (Nana) and Mac (Papa) McClain. He was the youngest of five siblings: Pat, Kathy, Mike, and Bryan. Mark was only 2 years younger than brother Bryan, and they were very close growing up; but he shared this closeness with all of his family. He and Bryan started a family ritual of hugging and kissing their loved ones, which spread through the family and to friends. He attended George B. Dealey grade school, Benjamin Franklin Jr. High, and Hillcrest High School. Terra says “He attended Texas State University (Texas State Technical College I think when he went there) and Collin College. Pat: “He was on the fencing team, and I believe the team won state” He also graduated from Control Data Institute Magna Cum Laude.

Morgan, his third daughter: “He saw my mom at that party and said to his friend “I have to know that girl!” Then he proceeded to take his date home and introduced himself to the woman who became his wife and mother of his children. That’s what he told me when I asked how they met.”

Jan, his wife and life partner: “We met at a party, in which he brought another date. He saw me, took his date home came back and introduced himself. He walked me back to my apartment and we started dating a week later. Mark was an intelligent, talented person which attracted me to him.  He loved to create dishes with his culinary talent and have me try foods made differently that I normally wouldn’t touch.”

Terra:  “He passed along his love of cooking with us and even created the best BBQ recipe ever (I’m not biased) with Katie, and named it K8TQ. Adding to the teaching, intelligence, and talent – He helped us girls with our school projects, like building toothpick & file folder bridges and many science fair projects, and he was typically the mastermind behind them. He was always supportive of our endeavors, from being a drill team dad, building props for performances, to a show choir-dad sharing his love of music. In true McClain fashion, he welcomed everyone into our family and cared for our best friends like they were his own kids. He was excited to be a grandpa and cherished the short time he had with the babies.”

Morgan: “When teaching us, instead of giving us the answers, he gave us the tools to find the answers ourselves. Instilling us with a thirst for knowledge. He was always so excited to teach us and he always had the right answers. He gifted us with a love of books and music by spending hours talking about the authors and their writing styles as well as listening to songs of all genres with a quirky smile on his face.”

Katie, second daughter: “He liked to make us laugh and was never short of corny Dad jokes, and cycled through a lot of the same ones. He had the best hugs – he would embrace you with all the love and life force in his body.

Pat, his sister: “way too many memories are crowding in, but here are some. Mark lived to help other people, and when I asked him for help I got about ten times more than I could have expected, all offered with love and grace because of his gracious spirit. He was extremely talented and intelligent and it was exciting to see the things he came up with, whether it was his marvelous color sense at the age of four, his exacting and imaginative cuisine later on, his broad knowledge of music, his sharing of the mysteries he loved, or any of the myriad things with which he enriched our lives. “

Terry Orr, brother-in-Law: “Mark was a joy as a child. I had no experience with toddlers when he came into our family and seeing this little guy with his own personality was a revelation.”

Sean Orr: “Being four years older than me, Mark was more like a big brother than an uncle. He introduced me to the music of Frank Zappa, Jethro Tull amongst many other great bands. Later, when he came home from attending SWTSU, he introduced me to Asleep at The Wheel, Dan Hicks and the Hot Licks, and one of my favorite all time albums, Bob Wills for the Last Time. A phenomenal chef. He introduced me to many culinary adventures, often getting me to eat foods I generally didn’t like. He also set me up with his 54 Telecaster that I played as my main guitar for years. He went on to his next adventure beyond our realm on Sunday. I certainly will miss you. “

Caroleigh McClain, his sister-in-law: “His Yorkshire Pudding was my favorite Christmas dish!”

The love of his family and friends is the measure of the man. Celebrate his life by remembering when, where, and how you met, and the life-vignettes you shared.

No Thoughts on Mark Edward McClain