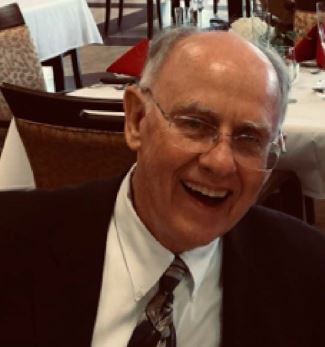 Ted is preceded in death by his wife Bea and grandson Kevin.

Ted is survived by Lois, his wife of seven years.

He leaves behind his children Barbara, Michael, Melissa, and Chris. Ted is survived by his grandchildren Christy, Damon, Mike, Tim, Katy, Sam, Matt, and Rebecca. Additionally, he will be missed by his great grandchildren Nadia, Wyatt, Harrison, Ted, Arlo, and Rowan.

Ted is survived by his siblings Jonathan, Doug, and Carolyn and their families. Ted cherished his relationship with Glenn, Bea’s brother, and his wife Barbara, son Greg and family.

He was born in Cleveland, Ohio to Maurice and Jean Hole.  Ted’s family moved to Philadelphia where he attended Lansdowne High School. There he met his sweet Beatrice Louderback which set in motion their love filled marriage of 58 years. Ted married Bea in 1954 while attending Wooster.

After graduating high school as class president, he moved back to Ohio to attend the College of Wooster.  While in college Ted played football and basketball with recognitions including; The Manges Athletic Prize (1956), induction in the Wooster Athletic Hall of Fame (1983), and the Distinguished Alumni Award (2002).  Ted served as trustee of the college from 1986 to 1990.

After graduation Ted and Bea moved to Houston to begin his geology career. Searching for gas and oil has kept Ted and his family on the move including stops in Lafayette, London, Houston and Dallas.  During this time, he served as geologist and exploration manager for Hamilton Brothers Oil Company and Hunt Oil Company.  Ted was instrumental in major discoveries in the North Sea including the Argyle Field and the Beatrice Field.

Ted belonged to the Episcopal Church of the Transfiguration in Dallas, TX.  He has participated in many activities including chairing the Endowment Fund, serving on the board of the Parish Day School, chairing the Search Committee for a Music Director and Organist, and participating in the planning and fundraising for the new church organ.

In his twilight years, Ted was blessed with an unexpected and beautiful love. Ted met and married Lois Folkers in 2014. Lois was the girl next door at his new home in Highland Springs. They enjoyed dancing, hand and foot card games, traveling, and time with family.

A Celebration of Life service will be held April 2nd 2022 at the Episcopal Church of the Transfiguration.

Donations in Ted’s memory can be made to the Parkinson’s Voice Project.

I’m so sorry for your loss. Sending prayers for the family.

Marilyn and Sonny
6:06am

May God grant you Peace beyond understanding during this time of loss. Our prayers are with you and the entire family and remember we are here and you are never alone, in Jesus Name. Amen

Maurice seems to have had a very full and happy life. His family will miss him but be left with wonderful memories of this loving and accomplished man. I know his brother, Doug who also is successful while “giving back” to make the world a better place.

So very very sorry Michael and family.
Your Father was a very accomplished man
and will be greatly missed by many.
My thoughts and prayers are with you and your family.

Wednesday dinner date night at Highland Springs with Ted & Lois. Always most enjoyable with good conversation and many laughs. We’ll cherish those memories.

Ted was a great friend and family man, and a devout Christian as well as a dedicated and hard working petroleum geologist, committee and board chairman. He will be sorely missed.

Just read in the Wooster summer magazine of Ted’s death. We spent many hours together in the geology building and have kept in touch thru the years. Patty and I send our deepest sympathy to the family. It was always a pleasure to be around him and he will be greatly missed by everyone.