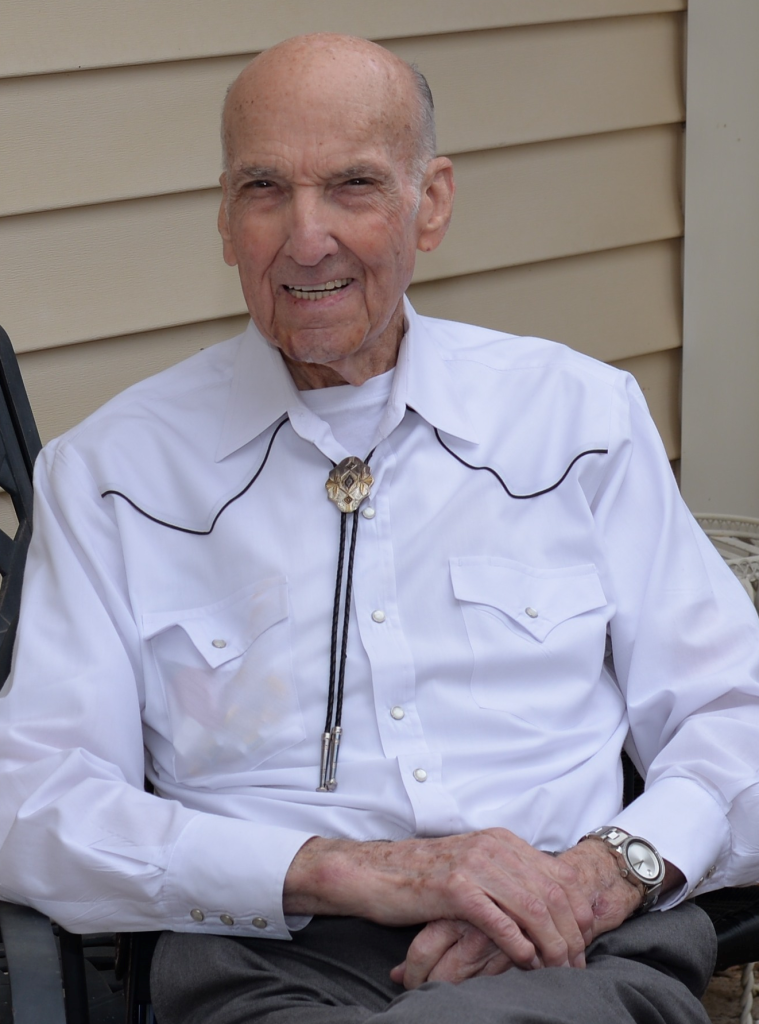 John’s amazing life journey began in Waurika, Oklahoma, being born to Willis Jerry Morrison and Offie Belle Bryant Morrison, and then moving to Dallas at age two in a buckboard wagon with his mother and four siblings. He grew up in “old Dallas” and saw the city develop from a depression-era cow town to a major international hub during his life. He graduated from Crozier Tech in 1942 and joined the Navy at age 17 to fly PBYs during World War II. He returned from the war and worked his way through the University of Denver. He practiced accounting for Sun Oil in California and returned home to Dallas to work for the original Frito Lay Company in its early days.  While doing so, he met a stunning dark-haired beauty on his walks to the office each morning. He finally convinced Vincenza “Virginia” Macaluso, to not only go to lunch with him, but to marry him and have four children and a 52-year marriage which ended with Virginia’s death in 2006.

John loved flying, horses, playing craps and his beloved ‘Gigi’ throughout his life. He led a large, loud, and loving family that continues his love of Texas and his inappropriate sense of humor.  He maintained that love of life and his sense of humor until he passed away at age 97, peacefully and surrounded by his family.

May the Soul of John Howard Morrison R.I.P.My very sincere condolences to all his beautiful family.

Please accept my condolences for the loss of your beloved father. I remember that he helped run the parent meetings at St. Philip’s when your family was still there. May he and your beautiful mother rest in peace.

Dear Morrison Family,
I am so sorry to read on the St. Martin Prayer List of your dad’s passing. Losing your dad is difficult but what a WONDERFUL and FULL life. He was so fortunate to be married to your mom for 52 years. Virginia was a saint putting up with John’s antics. It was hysterical when she would get on to him for doing something she didn’t think he should do or say. He always had a joke, something to say and never met a stranger.

I don’t recall John being a pilot. Mike and I didn’t know what PBY stood for so I googled it.
This is a snippet of what I found. PBY stands for Patrol Bomber, the “Y” simply denotes the manufacturer which was Consolidated Aircraft Co. The PBY was an incredibly versatile airplane that could land on both water and land runways. My dad worked at Consolidated Aircraft in Fort Worth. Isn’t that a coincidence.

It’s been awhile since John attended Mass there but there are such great memories of John, Virginia and all the family. One of Mike’s favorites is when Christina, Sarah and Joseph were bidding on everything on the silent auction in the hallway of the old parish hall. Mike asked them what they were doing and they said, “It’s the Price Is Right game. If we write down the right price WE WIN”!!! Virginia was working the Sweet Shop so Mike told John and Brian. Sharon Kuver was running the game and graciously marked out their bids. They would have won everything!! LOL!

Johnny and Lacee made us laugh so many times at Mass. When we saw them come in we had to sit on the other side of the church so we got something out of the Mass. If we sat behind them we would be focused on what they were doing. I remember Izzy Morris said she had to really focus on the Altar and priest when they were there too!! They were a HOOT!!

We didn’t get to know Rachel, Tyler and Trey as well as the other grandkids. They were much more reserved around all of the adults at St. Martin. They did do the regular kid things kids do in Mass. Theresa and Davis had to separate them just like all the parents did and still do. They always spoke to us and ready help Gigi whenever she asked them.

The best memory is when John Jr. and Brenda brought the kid’s to Mass at 8:00 am. It was raining really hard. Lightening was striking all around the church. It had been awhile since John Jr. had been to church. When John Jr. walked in lightening struck so close it struck the speakers. John Jr. jumped as he was right in front of them. Mike gave him such a hard time telling him, “God was telling you, you need to come EVERY Sunday.”

I remember how Virginia was in everything and John was there every time right behind her saying, “Yes Dear”. We all worked together setting up for the Carnival’s, Pot Luck dinners, Flowers for the Altar, mowing the church and hall grounds, horseshoe tournaments, funeral reception dinners and so much more. It’s seems weird we are giving y’all a funeral reception dinner.
I remember John was driving Virginia nuts after he retired. Virginia encouraged him to build Morrison Hall as St. Martin had begun to grow and there was no office space in the old parish hall. That hall served as the office until we were able to build a new parish hall with offices.
It’s not the same St. Martin’s John left. It has grown so much. We had 4 masses before Covid. Last Sunday was the first week the 8:00 am Mass was added. So different than the 2 Masses John and Virginia attended on Saturday at 5:30 pm and Sunday at 8:30 am. It was always so great to see John and Virginia’s faces when they brought the grandkids to Mass. They were so proud of all of them. When none of the grandkids were with them. John always kept us updated on what and how they were doing after Mass as Virginia was cleaning the Altar.
Mike and I have loved your entire family since we met y’all. It was a big loss to St. Martin when Virginia passed away. Please know you will be in our thoughts and prayers. I just found out this morning the rosary and funeral is today. Mike and I won’t be able to attend either service today but, wanted to share some of our memories of you. There will NEVER be another John!!
Love to all,
Mike & Mary Jones

I want to express my condolences and heartfelt wishes for the repose of his soul.