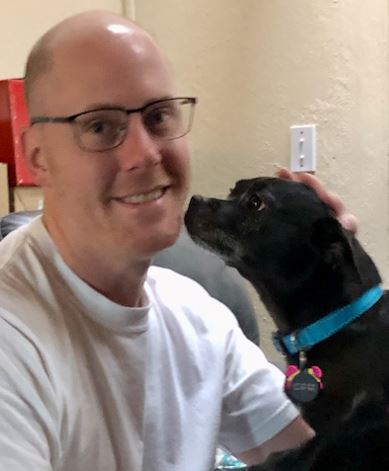 Nathan was born in Omaha, NE in March of 1982. Because his father’s jobs took him to various locations, Nathan grew up in Omaha, Iowa City, Iowa, Verona, Wisconsin and eventually landed in McKinney, Texas in 1993. He graduated from McKinney High School, had an associates degree from Collin College, and attended UNT and UTD in Richardson, TX.

Nathan was a professional server and held positions with Salt Grass Steak House, The Oceanaire, Chamberlains, and Snooze. He was also a musician, primarily a drummer, and an exceptionally good one. Nathan had a lifelong passion for family, music and cinema. He will be dearly missed by family and friends.

No formal service is planned, at the request of Nathan. A celebration of Nathan’s life is planned for later this year.

Memorial contributions in Nathan’s name are welcome to:

This hurts my heart so much. I saw Nathan a few months ago and it was great. I’m gonna focus on that night.

You will be missed. You touched many lives. God bless you.

Nathan my dude you were the best. Always on, and always calling it like you see it. You made me a better person knowing you. Thank you.

Love you all. I’m praying for Gods strength and Grace to help you through this incredibly painful time in your life.

My deepest sympathy to you, Chuck and Lori, and the rest of the family. You are in my prayers. ❤️

Nathan. You karaoked “I believe in a thing called love”. You were so good at it. You made it fun and hilarious and everyone loved it. I can see it now. You did it at a karaoke room in New York and again at the Snooze Christmas party. You LOVED peanut butter cereal and ate it every day. You loved eating at new places and traveling to new places, too. You were happy with what life gave you and that is inspirational and it’s how I’ll remember you. You were the most beautiful human. I’m so sorry you’re gone. It’s not fair at all.

Nathan was a real crowd favorite. His sense of humor made everyone laugh. He was great in the spotlight and was able to connect to anyone through his sincerity and humor.

He also was a dear friend I could confide in. He always spoke freely and honestly to me. I knew that I always had a place to stay if I was down and out and he the same. Friends like that are hard to find.

His love for animals was so admirable. I have never met someone who had such an ability to befriend any and all animals. It says a lot about Nathan’s character and who he was.

Nathan had great taste in film and music. I would often pick his brain about what movies or band to check out. He had a true love for the arts and was an encyclopedia of knowledge, even naming obscure actors that made cameos in films. We played music together countless times, he was one of the best drummers I’ve ever played with.

I wanted to leave a story here about Nathan I think he’d love told. He went to a show for a band from Omaha. During the show, Nathan would yell out to the band things such as his favorite pizza place in Omaha and the lead singer would acknowledge it and comment on the places. Nathan started asking if he could come up on stage and play drums and they eventually let him come up and play percussion for a song at the show.

I love Nathan deeply and this definitely feels like a hole in my soul. I will forever cherish the great memories and will always wish for just a little more time with him.

Nathan’s an outstanding drummer as well as a lovable person and I have recordings that show that. I miss him so.