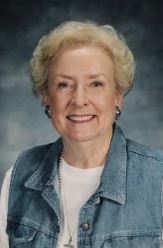 Patsy Alexander
February 24, 1933 – September 21, 2022
On September 21, 2022, our beloved Mimi, Patsy Ruth Stubbs Alexander, passed
away. She lived a long life and left us with many good memories. She’s just
catching up in heaven with her youngest son, Thomas, who also recently passed
away.
Back on February 24, 1933, Patsy was born in east Texas in the small town of Emory.
Patsy met the love of her life, Frank Goff Alexander, in the second grade. They
spent the next 80 years by each other’s side and in love to the very end. Patsy lived
internationally and travelled extensively around the world. Yet, Patsy remained
grounded and always loved getting back home to spend time with “the kids”. She was casual and
extraordinary in many ways. From compliments to back scratches to bread smothered in butter and
cinnamon, she lived her life proving that the small can feel big.
After growing up in Emory, Patsy and Frank Goff went to college together at East Texas State Teachers
College in Commerce. They married one year after college graduation. Frank Goff had joined the Air
Force to become a pilot. They had to squeeze in their honeymoon during a 3-day pass from Frank Goff’s
pilot training. Patsy excelled at being an Air Force wife and a mother to their two children, Steven, born in
1959 and Thomas, born in 1961. She kept the boys well adjusted as they moved on a regular basis from Air
Force base to Air Force base across the country and overseas.
Between moves, the family developed a travel bug. They took advantage of being able to see and
experience many foreign parts of the world. After 20 years in the Air Force, Frank Goff retired and
became an electrical engineer at Texas Instruments. Patsy taught school in Richardson ISD. She worked
until she was in her late seventies.
They continued traveling during summers when Patsy was out of school. Patsy and Frank Goff had been
almost everywhere in the world, but Patsy’s favorite vacations were the “Alexander Family vacations”.
This is when Patsy and Frank Goff would bring along Steve and Tom, their wives, and eventually the
grandchildren.
They would just be back from one family vacation, maybe a week, and be sitting at a Sunday family
dinner. Patsy would then ask, “So, where are we going on the family vacation next year?” Her children
have caught the travel bug as well, and it has cost them all a fortune! But their lives are much richer for
the bonding time spent on those annual family vacations.
When Patsy was not teaching, she loved to play bridge, do the crossword puzzles in the newspaper every
day, watch Survivor and Navy Seals, make elaborate photo albums from their latest trips, and visit and
babysit her grandchildren. She would never book a social outing on a weekend without checking first to
see if she was needed to babysit. Patsy was a fabulous second mother to her daughters-in-law. She was
a good listener and did not interject an opinion when it was not asked for. She loved to take them
shopping and to get their nails done.
Patsy is survived by her husband, Frank Goff Alexander; her son, Steven, and his wife, Cami; her daughterin-law Jodi; her grandchildren: Patrick; Chase and his wife, Caroline; Chloe and her husband Travis; and
her great-granddaughter, Noelle, who came into the world just in time to meet her Mimi.
A memorial service will be held for Patsy at Aria Funeral Home, 19310 Preston Road in Dallas, at 6 pm on
Thursday, October 13. After the service, there will be a reception at Steve and Cami’s house. On the next
day, there will be a visitation at Wilson-Orwosky Funeral Home in Emory, TX on Friday evening, October 14
from 5-7 pm. There will be a graveside service at Emory City Cemetery in Emory, TX at 10 am on Saturday,
October 15. In lieu of flowers, the family requests that donations be made to the Alzheimer’s Association.

No Thoughts on Patsy Alexander