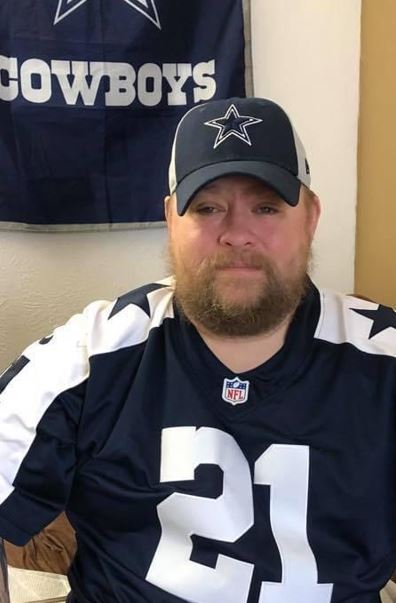 Stewart Christopher Morrison entered this world full of life on June, 27th, 1977 and passed away from cancer at home surrounded by family and friends while celebrating his early birthday. As a proud believer in God, Stewart lived his life to his fullest and loved everyone he knew fiercely. At a young age he became a Dallas Cowboy’s fan and continued to cheer for his favorite team throughout his entire life. After becoming paralyzed in 2006, he moved home to be with his mother. Stewart never wanted to give up walking again, so he did a lot of research for spinal cord injury patients. During this time he discovered several untraditional therapies and equipment that would help benefit himself and others in the same situation. Unfortunately, he learned that most insurance companies would not cover the therapy, so that is when his idea for the Dream2Walk Foundation began. He didn’t waste any time getting things started because he really wanted to help not only himself but others, so he built his foundation. His foundation helped bless so many others by gifting them scholarships for therapy and providing them with equipment they could use at home. When he was not working for his foundation he enjoyed playing in his Fantasy Football Leagues, watching the Dallas Cowboys and spending time with his family and friends. Stewart is preceded in death by his brother John Anthony Phillips, Nana Gloria Avard, Grandfather George Avard, Grandfather Rhea Keele, and Grammy Dolly Keele. He is survived by his mother Angela Morrison, father Stewart ( Randy) Morrison, step-mother Debra Morrison, sister Christina and husband Michael Raecher, sister Tanya and husband Mical Campbell, sister Stephanie and husband Jeff Holmes, nieces Tiffany Phillips, Samantha Covington, and Brylee Holmes, nephews John Anthony Phillips, Bryan Covington, Tyler Morrison, and Rylie Campbell, great nephews Everett and Jaxton.

Please leave your condolences here for other friends and family to share for many years to come.

One Thought on Stewart Morrison

My deepest condolences to Stews family and friends.