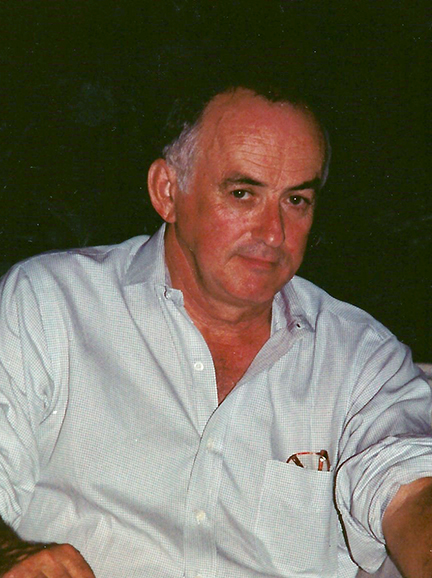 The original mind of Tom, Papa.  Husband to his best friend, Gay, father, grandfather, friend and mentor.  Painter of light and colour with luminous ethereal qualities concentrating on sea and sky.    He filled his sketchbooks with drawings to later become beautiful oil paintings.

Tom was born on January 9, 1935 in Farwell, Texas to Millie and Frank Freeman. He served in the Air Force in the Korean war.

He met the love of his life, Gay,  at a political meeting in Springfield, Missouri.   They rapidly became each other’s soulmates; dancing and twisting through the nights as he serenaded her, with Moon River becoming their song.

Tom and Gay moved to Dallas in 1967 and soon thereafter founded their interior design business, Freeman and Associates.  They traveled the nation and many parts of the world.

Papa led a quiet yet whimsical life, being the sociable one of Gay and Tom; playing guitar, singing, painting, playing tennis and doting on his granddaughters, Ally and Sophia, the utter joy of his life.   He taught them to think outside the box and later as his self portrait would demonstrate, sometimes inside the box.  He taught them to be stubborn at times and to listen to jazz music.

A dry wit, one of his favorite things to quote and mimic,  was from the movie City Slickers when Palance looks at Crystal and smiles cleverly as he holds up his finger and goes on to explain the meaning of life. “One thing, just one thing.  You stick to that and everything else don’t mean squat.”  Papa would hold up his finger and say, “This is the meaning of life.”  His one thing was love of family.

He was a member of the RLDS/Community of Christ Church; though, not active in a local congregation.  Tom’s faith was strong and his sincere love is reflected in the lives of his family and friends.

Survived by his wife of 62 years, Gay ‘Gaga’, granddaughters Ally and Sophia Maas, daughter Betsy Freeman, son Thomas W. Freeman and his wife Shelly, sister Carol and brother in law Dick Braby, sister Alice Freeman and sister Nancy and brother-in-law Mike Barnett, as well as a big loving family of cousins, nieces and nephews.  Preceded in death by his brother Frankie and parents.

No Thoughts on Thomas Freeman