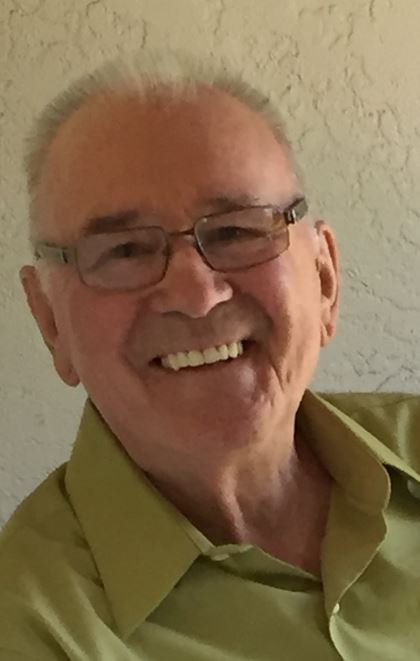 Tim passed away peacefully on December 11th, 2021 at Bader House in Plano, Texas.  He was born in Hayes, Middlesex, UK on January 29, 1934, a son of the late Patrick and Catherine (Scanlan) Lyons.  He was enveloped by the love of his family and friends near and far in his final days and throughout his life.

Tim was an optimist, a dreamer and an adventurer.  He believed anything was possible. Tim was always ready with an encouraging word.  His smile was contagious.  Tim lived an extraordinary life.  We will continue to hear his voice – “Go – live your life and be the best you can be.”

Tim attended Botwell House Catholic Primary School and went on to graduate from Southall Technical College.  He served in the British Army with the Royal Mechanical Engineers in Gibraltar 1956-1957.  After his National Service, he made his career as an engineer.  Tim worked for The Perkin Elmer Corporation in the USA and in the UK for over 30 years.  He was always learning and enjoyed being a member of the Institution of Mechanical Engineers (IMechE) where work of his fellow engineers was featured for bringing countless meaningful ideas to life. At his retirement his title was Director of Worldwide Gas Chromatography Research and Development. Gas chromatography is used extensively in medicine and forensic science among many other applications. He loved his job and was inspired by the creativity and energy of the young engineers he mentored.

After retirement he and his wife, Maureen, moved from their longtime home on Ball Pond in New Fairfield, Connecticut to Bradenton Beach, Florida. They enjoyed many years together on the beach soaking up the sun. Tim volunteered his leadership as President of the Parks and Beautification Committee which brought him joy and a sense of purpose and where he was able to ensure Anna Maria Island would be left better than he found it for years to come. Tim and Maureen also traveled extensively to many places they had dreamt about for years.

Tim’s family here in the US, and in the UK, was a source of deep joy and pride for him throughout his life. He loved his wife, daughters, grandchildren, siblings, nieces, nephews and his extended family, wholeheartedly. He will be remembered with a smile always by so many, including his daughters – Katrina, Alison and Melanie their husbands and wife – Tom, Christopher and Tina; his grandchildren and their families – Sarah (and husband Mike), Michael, Cate, Raven and Mason; and his sister, sister and brother-in-law, and nieces and nephews – Anne, Alan, Una, Pauline, Sharon, Carrie, Timothy, Danny, Jayne, Oonagh, Debby, Niall and their families.

In addition to his parents, Tim was preceded in death by his beloved older brother Patrick Lyons of Hayes, Middlesex, UK and the love of his life Maureen Watkinson Lyons to whom he married for 52 years.

Tim’s family would like to acknowledge the entire staff at Bader House Memory Care in Plano, Texas for the loving, intentional, and uncommon care he received over the last 2 years.

On the day of the Mass, the livestream can be viewed here:

If you click on that link before the 29th, other events may be listed, however on the 29th the livestream will start for the Memorial Mass for Timothy Lyons at 9:50AM Central Standard Time.

Also on the day of the Mass, the livestream will be simulcast in two places:

If you already have a Facebook and/or YouTube account, the live version of the Mass should pop up at these links at 10AM on the 29th.

After the 29th, the archived Mass will be available in roughly 1 week on the “Replays on Demand Page”:

If for any reason you have any technical issues or the Church experiences any challenges in livestreaming the Mass we apologize and invite you to pray with us in spirit. We will not be able to provide tech support on the day of the Mass.

Condolences may be sent to: The Lyons Family, c/o Katrina Bailey, 6926 Middle Cove Drive, Dallas, Texas 75248, please share your favorite memory of our Dad. In lieu of flowers we welcome memorial gifts in honor of Tim Lyons through the Alzheimer’s Association, https://www.alz.org/.

Oh, the memories! What a beautiful tribute.

One of our most memorable memorieswas the family reunion in Niagra Falls! Need I say more?????!

I loved your parents very much. Your dad was so loved by parents, Kathy and John Scanlan. They were so proud of all of you. What a blessing when you came to us in America. I don’t see my sisters anymore. My parents are gone and l just sold our home. I am sure they all welcomed him in heaven. I am so sad for you at the holidays. Your dad was a great, kind, funny guy. So handsome. All my love. Dawn Scanlan

My condolences to the Lyons family and all those who knew and loved Timothy Lyons known to me affectionately as uncle Tim. Tim who in actual fact was my second cousin was a good friend and first cousin to my late Father Patrick Cahill. My father who was only a year older than Tim would tell me endless stories of their shenanigans during their early years together in England. I too have fond memories of visits with Tim and family in Cleveland, Ohio and our home in Ontario, Canada. Sitting around the dining room table telling stories about their family was a treasured memory I will always keep with me. He certainly had a full life and embraced all that it had to offer. He will be missed by all his family in Canada.

Thank you, Laurie! Niagara Falls certainly brought our family together many time with lots of awe and laughter.

You are so right, Dawn, he really did embrace life! Thank you!

“Endless stories of their shenanigans” sounds just like them! Brings me lots of joy to envision that dining room table.

What wonderful memories I have of both of your parents . I’m so sorry. Your father was the sweetest man and a gentleman. I know how much he will be missed. He’s now resting in the arms of our Lord and with your mother. Love and prayers ❤️

Sending condolences to all the family inevitably spurs great memories of Tim: from our days together with ‘the gang’ that developed from the Church Youth Group in Hayes (UK) in the ’50’s; the harmless mischief that accompanied the regular Easter bike trip to Brighton; ‘gang’ parties at his parents home, featuring innumerable firkins and pins of ale; Christmastime visiting to ‘gang’ homes, with Tim’s father (temporary ‘gang’ member!) invoking “Bless this house” at every call; carousing at brother Pat’s Irish wedding; following completion of our respective National Service terms a vocation in Italy, involving a riotous road tour through France, Austria -and some best forgotten places in between; and decades later, after going our separate global ways, reunions in Florida. Finally a ‘coming together’ in Texas: Tim in Dallas; me 15 miles west in Arlington. A long road, well travelled, greatly enjoyed. Rest in peace Tim.