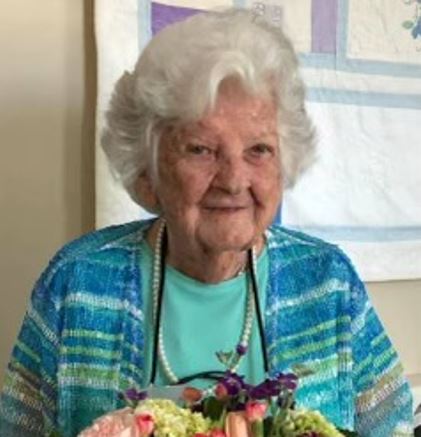 Born August 4, 1922 in Arjay, Kentucky to A.D. and Anna Meadows, she lived in Kentucky, Florida, Mississippi, Washington D.C., Indiana, and Texas. Virginia spent her
childhood in Harlan, Kentucky with her parents and two brothers, Wallace and Wilbur. The family had a candy company business where Virginia was in charge of quality control, testing
one candy bar a day. Virginia attended Bowling Green College until helping move her parents to Florida, a better climate for her ailing father.

In Boca Raton, Virginia worked as the secretary to the flight surgeon at the Boca Raton Army Air Field, a World War II United States Army Air Forces airfield known as the only training for the then new and secret technology of radar. There, Virginia met her husband, Joseph M. Myers, who was serving in the Army Air Force. The young couple finished their service and moved to Laurel, Mississippi. They then moved to Washington D.C. where Joseph finished law school while training as an agent for the Federal Bureau of Investigation. Virginia continued her career working as secretary for the F.B.I. director, J. Edgar Hoover. They started their family in 1947 with the birth of their first daughter, Barbara, born in Hollywood, Florida. Their second daughter, Joanne, was born two years later in Washington D.C. The career in the F.B.I. took the couple and their young family to live in many places. Joseph was assigned to the Fort Worth office of the F.B.I. and they settled in Dallas/Fort Worth, Texas in 1955 where their third daughter, Brenda, was born. With busy careers and raising a family, Joe and Virginia still enjoyed traveling extensively.

Virginia continued working in security operations at a global aerospace company while raising their three daughters. Also talented in designing and sewing, Virginia enjoyed sewing for
her daughters. As her children grew, Virginia began collecting dolls, a passion she had as a child. The passion became an important interest and business as she began to design and sew doll
clothes. Her creations are cherished by doll collectors at home and abroad. Through her interest, she became active in various groups and a member of doll clubs where she found many friends,
whom she cherished. Virginia and her daughters traveled extensively attending gatherings of her like-minded friends.

A Celebration of Life will be held on Virginia’s 100th birthday, August 4, 2022. She will be interred at a later date with her husband at Arlington National Cemetery, Arlington, Virginia.

My dear Mama, there are not enough words to say how much I miss you. What an extraordinary life you lived. There are so many wonderful memories I will cherish the rest of my life. Thank you for being the best mother and friend anyone could hope for. I know you are dancing with Daddy in heaven with Barbara and Joanne holding you close once again.

It warms my heart to see how much you loved your grandmother. A role model for all grandchildren.
Sending live, prayers and blessings to all.

My deepest condolences to my friend Brooke Dacy n family . May she RIP. What a blessing almostv100 years old. ✝️✝️ ❤❤ .

Brenda, I know your mom will be missed by all that knew her in the Sashaphiles community. She was one of a kind. A true bright light in all our hearts ♥️. She lived a long a happy life and now reunited with those that left before her. Hugs my friend

What an amazing life your mother lived. The two of you had a wonderful relationship. Love’s last gift, remembrance. RIP

What a wonderful lady you were only knowing you they Sasha I feel blessed.
Amazing life you led and I can imagine the stories you take with you.
Will miss you at the festivals but know you will be watching from above and smiling as you always did

Will try a second time
What a life you have led. Amazing the stories the stories you can tell and I am sure you shared with your kids
Always loved to to see your smile at the Sasha festivals beginning in New Jersey.
Will miss them

May she rest in the peace of God. My deepest condolences to Brooke Dacy and all her family. God bless you.

Prayers for you all! I never knew how exciting her life was! What an amazing wife, Mother, Grandmother and Great Grandmother she was! Love to you all!

Dearest Brenda and Family,
I am so grateful for the times we shared. Whenever I think of Mrs.Virginia a smile fills my heart. I will cherish the day that I met her. May God continue to bless and keep you. Some day we will all be together!
Love Always,
Pat Peterson

I am so glad I got to know Virginia through our shared love of Sasha dolls. It was so much fun to see her and Brenda every year at the Sasha Festival and to share fun times. Virginia was a classy lady in every sense of the word. She was well loved in the Sasha community and will be sorely missed. My heartfelt condolences to Brenda and the rest of the family. May your many wonderful memories bring a smile during the sadness.

Virginia led a very interesting life. Glad she joined the dolly world for our paths to meet. Sweet lady! She will be missed.

To Erin & Brooke & Brenda. I remember coming to spend the day at your Grandmothers home to be with Barbara & JoAnn. Your Grandparents were so gracious to me and we all had a great afternoon together with much laughter. Especially enjoyed seeing your grandmother dolls and the beautiful work she & Barbara both did together! All of you are such a beautiful family. Brenda I know you arec such a beautiful person to take such wonderful care of your Mother! With Love Angie Huntington

Erin,Brooke & Brenda
Such fond memories of your Grandmother and spending the day at her home when Barbara came to visit! Your Grandparents were so gracious to me inviting me to their home and we spend the day visiting with much laughter! As always JoAnn made us laugh and brightened the day! Brenda, you are a beautiful person taking care of your mother for so very long. God will truly reward you! With love Angie Huntington