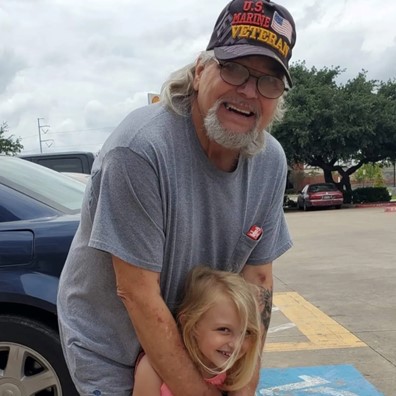 Born on April 22, 1957 to Nicolo Santangelo and Alma (Hopkins) Santangelo in El Paso, TX, Bill was the fifth of six children.  He joined the Marines in 1975, completed boot camp, married and moved to Jacksonville, NC where both of his daughters were born.

Bill went on to become a diesel mechanic and was always proud of his work.  He took great pride in his ability to work on and maneuver heavy machinery, and for being able to fix just about anything. He worked many years at Cowtown Charters as a mechanic for their diesel busses and also traveled the country as the charter bus driver. He spent much of his time on the weekends in Lake Fork, TX, doing what he loved – fishing.  He took joy in hunting, especially with his bow and arrow, and even took a few trips up to Canada.  Although Bill lived in a different state than his daughters, he always made time for them to visit. He loved taking the girls to Lake Fork when they were small, teaching them how to fish and ride on the four-wheelers. Later in life, he enjoyed spending time with his three grandchildren, Serena Cuccio, Chase Proctor, and Blake Proctor.

Over the last 15 years, Bill endured many health issues, including a broken back which changed his life drastically.  He retired and lived quietly at his home in Garland.  He was an eternal optimist, always hopeful that he would one day get back on his fishing boat and be pain-free.  His love for fishing and the thought of one day getting back out there, is believed to be what kept him going for so long. Despite his challenges, he was always happy, smiling, and didn’t let it get him down. He traveled as often as he could to see his daughters in Illinois and California.  He was a devout Cowboys fan, and never missed a game.

He is preceded in death by his mother and father; his brothers, John Santangelo, Nicolo Santangelo Jr. and his sister, Judy Fountain. He is survived by his former wife Cynthia Mordini and their daughters, Autumn Cuccio, Michelle (Brian) Proctor; his son Nicholas Hix; sister Susan Davis and brother, Phillip Santangelo.

Bill was such a great man and loved by many.  His daughters are forever grateful to his good friend Janice Hix and her family for their invaluable support and for surrounding their Dad in love.

Burial service will be held at DFW National Cemetery at

In lieu of flowers, the family requests you spend some quality time in the great outdoors, maybe even with a fishing pole in hand, with your loved ones, in his memory.

Condolences to the family. May the spirit of the higher power shine down upon you. I remember going fishing with Bill in Wisconsin. He was teaching me how to bait a hook but… every time that worm squirmed when I went to poke it, we’ll, I couldn’t do it. And Bill was kind and gentle and did it for me and we resumed our peaceful journey.

Bill was my first serious love. We married in September 1975 after he completed boot camp,and off we went at a tender age of 18 to make our way in this world. We lived on base at Camp Lejuene for 3 yrs. Upon his discharge we moved to Illinois. We ended up getting divorced in 1982 ( one of my biggest regrets in life) He moved back to Texas and our 2 daughters and I stayed in Illinois. We remained friendly over the next 40 years. We always had a good time when he would travel to Chicago and visit with the grandkids. Of course this past summer he bought the older kids their first fishing poles. I will carry on his legacy and continue to take the kids fishing while I tell them wonderful stories about their grandpa. He will always be my Billy Boy!!!

This is a hard one for me. Billy was my 1st cousin, I knew him his whole life. If there was mischief to be found he found it, but he was always silly, loving.
We salute your Veteran and our condolences for your loss and great gratitude for your loved ones service to our great country.
.may the love of friends and family carry you through your grief, a n d may your hearts soon be filled with wonderful memories of joyful times together as you celebrate a life well lived