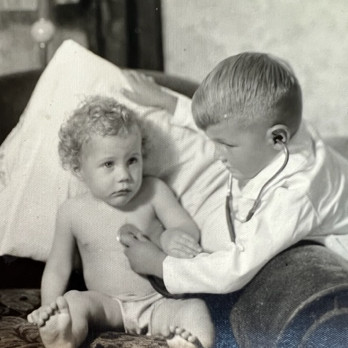 William was born in Shawnee, Oklahoma on May 18, 1931, to Dr. Morris and Mary Smith. They moved to Guymon, OK in 1932 and survived the Dust Bowl. He graduated from Guymon High School in 1949 and enrolled at the University of Oklahoma where he graduated from medical school in 1956. After two years of postgraduate training, he enlisted in the United States Airforce and served as Chief of OB-GYN at Vance Air Force Base in Enid, Oklahoma. He then served 3 years in residency training in internal medicine after which he served in Enid for 30 years.

He was a commercial pilot. He and Joan spent their leisure time golfing, snow skiing, taking bicycle tours, and international travel.

William accepted his Lord’s grace and mercy at the age of seven and served his Lord as deacon and Sunday School Teacher for 60 years. At the time of his death, he was a member of The Heights Church in Richardson, Texas.

He is preceded in death by his parents, brother T.J., sister Sue, and his daughter, Julie. Memorials suggested to the Enid United Way or The Texas Baptist Men’s Disaster Relief.

Mr. Bill will be truly missed. He left many great memories – Revelation 21:3 & 4

I can’t remember if it was Steve’s 30th or 40th birthday we gathered for in Dallas. My memory fades.

What I do remember is that it was a true celebration, with Steve surrounded by family, friends, and people that love him as much as I do. Driving in, flying in, this wasn’t going to be something we missed.

And while the focus that night was on Steve, I couldn’t help but glance several times at what I would consider to be the head table, fronted by Dr. and Mrs. Smith.

Dr. Smith had a smile and laugh that could light up a room. When I talked about how jealous I was of Steve’s Batman lunchbox and offered to trade him my Snoopy lunchbox, to no avail, Dr. Smith would just laugh and laugh.

When Chauncey and Lani got up and traded stories about Steve, the doctor would just laugh even harder, despite Steve trying to stand up and refute them. I think that prompted him to laugh even more.

But what I remember most about that night is something that I’ll come back to.

I never saw Dr. Smith lose his temper. His kids might have, but I didn’t. Not even when Steve and I built a 9-hole golf course in the backyard on Oakwood, and we came close about 3 times to smashing the kitchen window, where we’d unwittingly built the 8th hole about 3 feet from the house.

I never saw him lose his temper when he tried for at least 3 years to kill a mole in his backyard. He just became more and more of an evil genius.

I never saw him lose his temper when I went to play golf with him, Steve and Mike, and those two practically went to fisticuffs before we got down the first fairway. He just kept walking toward his ball.

Unflappable. Except when it came to being proud of his kids.
Bobby, my friends and I didn’t really know you, because I think you were born about 45 years ahead of us.

But I remember Dr. Smith talking many, many, many, many times about your trip to the Amazon. The stories always started out “This is crazy, but…”, and always ended with “Can you believe that?”.

He was in awe of you.

Julie, you were the apple of his eye. I’ve never told anyone this before, but on a break from a Risk game that Julie was sitting in on, I went to the kitchen to get something out of the fridge to drink.

My fears of Steve replacing some of my armies in Kamchatka while I was away were soon replaced with the Doctor out of nowhere putting his hand on my shoulder while my hand was in the fridge and saying, “Go easy on her tonight. She’s had a tough week”, and then walking away.

My eighth-grade mind went “what?”, but I knew what he was saying.

Mike, I’ll speak directly to you on this, because I don’t have a story on your Dad and you. But you used to be the band at my dances. You used to do things on stage in school that no one else but a handful of people had the guts to do.

I still remember playing cards with you in Steve’s room, and you were doing an imitation of Martin Short in the Big Picture that was so spot on, I thought I was watching the movie I had already rented 3 times before. But nobody but me got it. So, when you went to the bathroom, I whispered to everyone at the table, “Do you have any idea how good that is?”.

You inspire me Mike. And while I can’t speak for your father, I’ve got to believe that not only did he recognize the great ability you have, but he was inspired by it to.

Steve, I’ll keep this short and sweet. I didn’t realize until way late in life that your father may not have just been one of the stubbornest men on the planet, he may have actually taken first place.

So my question to you is, did you acquire that trait from him, or did he get it from you?

Which leads me back to Steve’s birthday party.

I couldn’t just describe Dr. Smith as smiling. I couldn’t simply describe him as laughing. What he was, was beaming. Like to the point that if Bobby could have hooked him up to the electrical grid, he probably could’ve powered 3000 homes that night.

That’s how proud he was.

So I’ll close with this.

Dr. Smith was a pilot.

I’m a 26 year aviator. It doesn’t matter if some of those years were desk duty. I will always be an aviator.

When aviators lose one of their own, they get together, no matter how small or large, and they say what to someone outside of the aviation community may consider to be the most underappreciated, undervalued, most disappointing words they ever expected to hear at end of life.

But to an aviator, they are the most important words a person can say about their brethren. They are beyond redoubt. They are the life.

When we lose another aviator, there is one person that holds a glass in the air, imaginary or not, and says the aviators name, with the following: “He will be missed”. With the rest saying those last words.

I’ve said those words many times, each with as much sorrow, remembrance, knowledge of a shared experience, and joy of life. But they’ve always been said with the greatest respect I can give anyone.